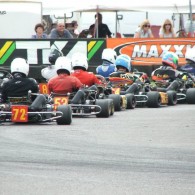 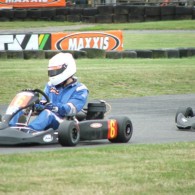 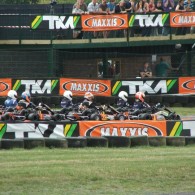 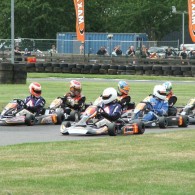 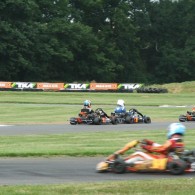 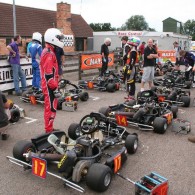 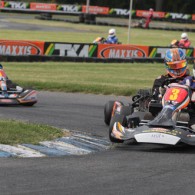 The TKM Festival is one of the most competitve races on the 2010 calendar, the event is fully televised and can be viewed on Motors TV or at the bottom of this page! In the build up to this years event I would say that we stood a good chance of winning it; we had performed well against the competition in all the races we had done and a lot of the time came out on top.

We found very good speed on Friday and were one of the fastest, putting in lap times that were consistantly below my official lap record from last year. This was encouraging because qualifying was critical at the Festival as it determined where you start the first heat. Qualifying was done on Saturday and we came 5th. This was a solid start and we just needed consistant finishes in the heats and generally speaking I got them; 5th, 9th, 5th, 6th.

I started the Pre-Final from 5th and hoped that I could improve my starting position for the final (the grid positions in the final are determined by the finishing place in the pre-final). This was easier said than done, and it started to become obvious that although I had been racing regularly, I had not been competing in the British Championship this year and my race craft had suffered slightly as a result. Simple things like covering corners were not as well practiced as they once had been and as a result I finished again in 5th.

Back to the van and we found that part of the chassis had cracked as it connects to the floor tray. Although it’s not a massive thing, all the flex in the kart goes through the floor tray and without it connected in places the kart would now be very soft. The start of the Final was not my best (again a lack of racing in Super 1 this year), but the pace in the kart was just not there. I was able to make up a few places to get myself back to 6th, and just needed to push to catch the group ahead; it was an ideal opportunity with a gap in front and behind. The pace just wasn’t in the kart and my lap times were 0.5 seconds a lap slower than in the pre final. Frustrated, I could just do no more and had to just push to the end in case something happened at the front.

Last lap and the group at the front had bunched right up battling. I still had a gap to make up but was closing in should anything happen and I could pick up the pieces. The video shows the last lap better than I could ever describe it! Michael Rich took the win, and it was well deserved, he had a perfect weekend apart from not defending on the last lap he had driven faultlesssly. In the video I am always there, but just in the background. I felt as though I had raced hard this weekend and the result of 8th in the Final was not a fair trade for the effort that I had put in, but thats the way things go sometimes. Perhaps if the kart was 100% the result would of been more like what I hoped for.

I’ve included the TV coverage below and some photos too, which were taken from Facebook so credit has to be given to Gary K. Mann, Glenn Guest, and Jamie Hunnisett. Cheers, this has been a bit of a long report!