Unlike the rounds up until now which were one day events, this was the first proper racing weekend starting with practice on Friday. We arrived at the circuit with yet more changes since we were last out. Starting with the most obvious; the racing stripes, website stickers and Caterbuild stickers. Although it’s unlikely that they made the car go any faster, it was easier to spot on track and it looks much better. The list of performance boosting things is as follows; advanced ignition timing, new tie rod ends and complete wheel alignment to sort out camber, castor and toe.

Friday testing showed that we were improving in terms of lap time compared to the others, but speed in straight line seemed to still be a big issue. Round the corners I was not losing any ground but as soon as I had exited the corner i’d be overtaken. It’s so frustrating because no matter how much i’m told to ‘carry more speed through corners’ by other people I know the car is on the limit and it’s just an engine thing. The issue is not being able to find the root of the problem. Concentrating on working with what we had was the only option so we made some refinements to the handling and the car felt really good through corners. 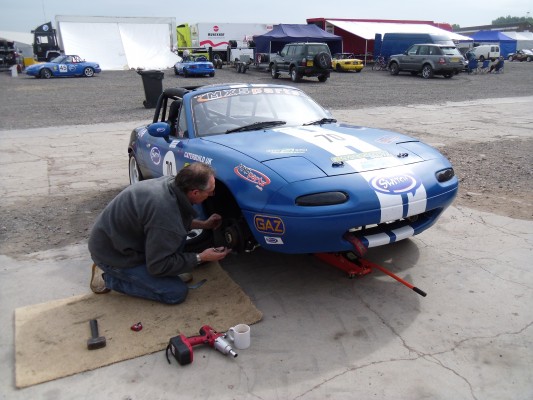 Saturday was a different day altogether, heavy rain overnight meant that it was wet for qualifying which didn’t bother me too much as I always liked the rain in karting. The same principles were needed in cars – stay off the racing line and keep it in a straight line when powering out of corners. Again, the car felt good, it was just let down by it’s lack of straight line speed. The result from qualifying meant that I would start 17th and 18th respectively in the two races. 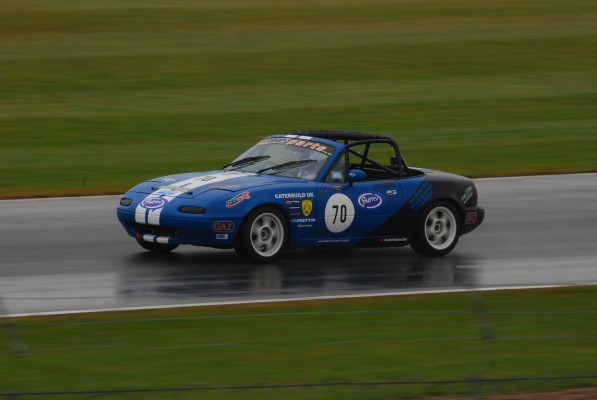 Qualifying in the wet

Race 1 was perhaps the most frustrating race I have ever competed in. I got off the line ok and then got boxed in on the approach to the first corner so lost a few places by being slowed up on the inside line. Despite my efforts to make up places on the twistier bits of the circuit, as soon as I got to a straight it was the same old story. And just when things couldn’t get more frustrating I was lapped on lap 13 as if I was standing still. Something has to change, because that hasn’t happened in over eight years! The car is just not right still.

Race 2 was a final chance to give it my all and see what happened. The start was better and I launched it round the outside and was into 15th as I exited the first corner. As the race developed I dropped back down the order a bit to finally finish in 18th. Overall, I did acheive my goal of finishing in the top 20 so we are moving forwards, but I can’t help but think that there is a big problem that we are yet to find and when we do then things will pick up massively. Keep checking back to the site and i’ll post on here any developments.