Again it was a case of learning the track in qualifying as we weren’t able to do the Friday test. Oulton Park is quite a challenging track and it took a bit longer than hoped to get to grips with it. Starting both races from the 13th row of the grid was not quite what I had hoped for but all was not lost.

It seemed as though the setup changes we had made produced a very well balanced car that improved my confidence when pushing it. Sorting out the front brakes also added to the pleasure of driving it! The conditions were dry for my two races, unlike some of the other races during the day  which got caught out by a sudden heavy shower.

I moved forwards from my starting position in race 1 and in race 2 which is always good. I finished in 16th in the first race, and was disapointed to have just missed out on the top 15 but from 25th on the grid I guess I can’t complain! Race 2 was very similar, gradually working my way through the field. I gained seven places in this race and that was enough to receive the best improver award (the person who gains the most places). 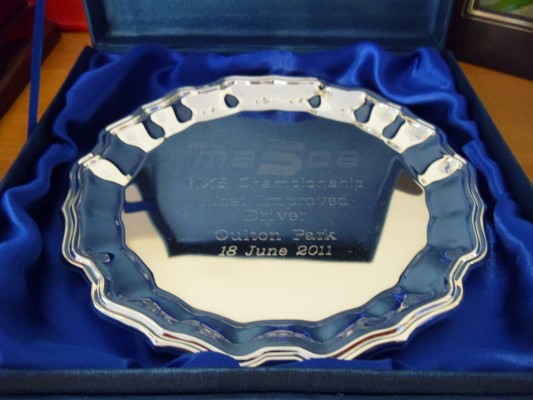 Overall, not a bad weekend. No damage and a car that feels like it handles better than ever before. Perhaps the wet conditions from Castle Combe last time out slightly disguised the power of the engine as it seems as though it’s still a bit down compared to the others. In reality we are chasing two seconds a lap to put us firmly into the top 10. At the moment we are a consistant mid-field runner but with some more changes hopefully i’ll look forward to finishing higher up for the rest of the season.