Unusually for a Ma5da event racing was condensed into one day (Sunday), which left Saturday free for a charity Karting event organised by Ian Sowman – who is now becoming well known for his Karting events! So i’ll start with a breif summary of how that went; it was wet, very wet and we were all on slicks which was great fun as there was no grip. I got into the A Final but got caught up at the start and lost any hope of winning the short four lap final. It was probably the most competitive Karting event Castle Combe have ever witnessed and money was raised for a good cause – Teenage Cancer Trust. 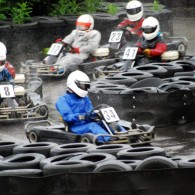 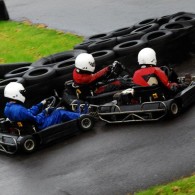 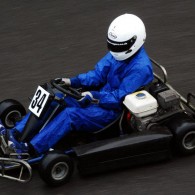 Back to the main event… which was dry and sunny to start with. Qualifying was a bit hard as although I had been to Castle Combe last year that race was wet. The track is fast with short run off areas and so it can take time to explore the full limits. I felt my time was a reasonable representation of what the car could do and so was very surprised to see my name in 16th. Maybe there was more time to be found, so I just moved confidently into race one.

The worst jump start ever made race one pretty embarasing. For some reason (and I really haven’t got a clue why) I went on the fourth red light and not the fifth. It was so much of a jump start that I had time to stop again before everyone else had started to move! It’s gonna look awful on the TV coverage. I was tempted to just go for it but I think I made the right move to come to a stop as I avoided a penalty. I also lost a load of places, but still managed to finish the race in 12th.

Having learnt my lesson I decided to start race two at the same time as everyone else and pulled away as soon as the fifth light went out. At this stage in the weekend I knew that I was driving a car that was not at the same level as those around me and you can see it in the video; struggle to stay with any other cars on the straight but gain it all back under brakes (first corner especially) or through the corner. A red flag came out to stop the race after an accident. Whilst that car was being recovered and we were assembled on the grid for a restart the heavens opened and the rain poured down. This couldn’t of been better for me, as engine power becomes much less critical in the wet. From starting 16th on the re-start I got up to 11th during the 6 lap sprint. Visibility was terrible as the video shows. We need to head back to the dyno and address the power issues otherwise for the rest of the year I’ll only be able to look forward to more of the same.