This has to be the best weekend racing i’ve had since leaving Karting a year and a half ago. It was nice to finally get my hands on a trophy, and meet the goal I set myself at the start of the year of a podium finish. So what changed?

The week leading up to Brands Hatch involved two late nights changing the cylinder head over for one of Rhys’ old one. It isn’t the best cylinder head he’s had either, but it helped to prove a point that ours was not up to scratch. We both headed down to our usual rolling road – BD Engineering in Sittingbourne on Friday and mine made another 2 bhp with his old cylinder head on.  We think mine was worked on too many times and it has started this year slower than when it ended last year. However despite our gains, we are still 4.3 bhp down compared to Rhys.

I couldn’t get time off to do the test session so had to re-learn the track in qualifying. The wet conditions definitely helped and I was 6th quickest. Happy with how the day had started I was confident about race one. Besides a safety car intervention after a first lap accident it was a bit of a lonely race for me in 6th and so the video is pretty short as a result. To be honest I did well to avoid the first lap stuff as off camera there is a car heading backwards towards me which is why I take to the grass.

Race two is the memorable one. Heavy showers made conditions almost impossible to predict. We opted for wets and a slightly softer setup than usual. Every lap was different and it was really hard to judge how much grip there was. It was by no means an easy race, and positions were constantly changing. In the damp conditions my pace was strong and I was able to close on the cars ahead. When the two in front collided at the hairpin, it was a dream scenario for me as I slotted myself into second. From there it was a case of pushing as hard as I could to get a gap, which I managed until I caught the backmarkers.

There were a lot of blue flags but one of the backmarkers just wouldn’t let me past, perhaps mistaking me for someone he was actually racing. It delayed me by 3.5 seconds and allowed the group behind me to close rapidly. I was getting frustrated and didn’t want that to be the reason I lost second place. Thankfully for me the number of cars littered around the circuit bought the chequered flag out a bit early and secured my best finish to date.

Waiting until the last race of the day had finished was not as much of a problem when there is a trophy to collect at the presentation. What caught me by surprise was also being awarded Driver of the Day for my efforts and it was great to finally get some recognition for the time spent on that car. The added bonus is the Scaletrix set that you get for winning Driver of the Day as part of the Championship sponsorship. Next round is Knockhill… 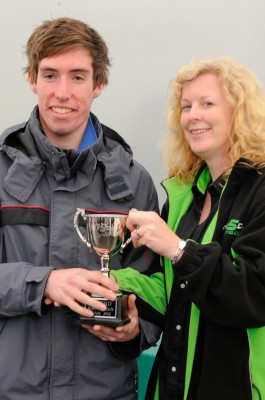