Same results as Brands – very different weekend. 5th place was starting to become a bit of a running joke and I now have quite a big collection of the little 5th place trophies. It’s a shame that due to missing quite a few of the early rounds, we were not competing for the overall championship; consistency is the key to a successful campaign.

As mentioned at the start, this was a very different weekend to Brands Hatch and I had to work a lot harder for the 5th place. The weather didn’t help as it was very unpredictable. Rain one second, clear the next. During qualifiying I managed to grab 3rd in my group on the last lap much to the annoyance of Blink Motorsport ;) 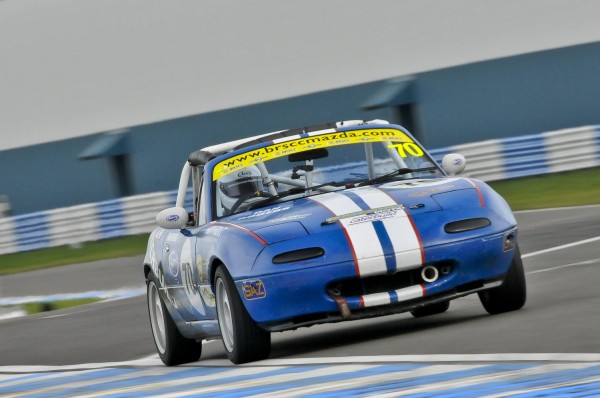 Race One I started 5th as the two qualifying sessions got combined to form the A and B grids for the weekend. A bad start put me back in the pack and meant that I’d need to fight my way through. Rain midway through the race caught out a few people, and it was only when it stopped raining that I had the speed in the car to make up places. As ever, it came down to the final few corners, and with the help of some “bump drafting” down the straights managed to make my way from 8th to 5th.

The final race was one of those races where it was a tough call on whether it would rain or not. I went for a really soft suspension setup with the hope that it would rain again. Unfortunately it was the wrong call and the car was a complete handful. You can see just how bad it was on the TV coverage, where it looks like I’m in some sort of drift competition on the first lap. Once the race settles down, I end up in a close battle with Alex Preston which continued lap after lap until I was just able to take 5th ahead of Alex in 6th.

Check out the TV coverage of the race below. I’ve set it to play at the start of Race 2 so you can see just how the car was handling!