It’s been 3 years since I last raced at Rockingham. A lot of people describe it as a circuit lacking character, and whilst that’s partly true due to the sheer size of the place, it remains a challenge to drive and the twisty infield section is really good fun in the Mazda. 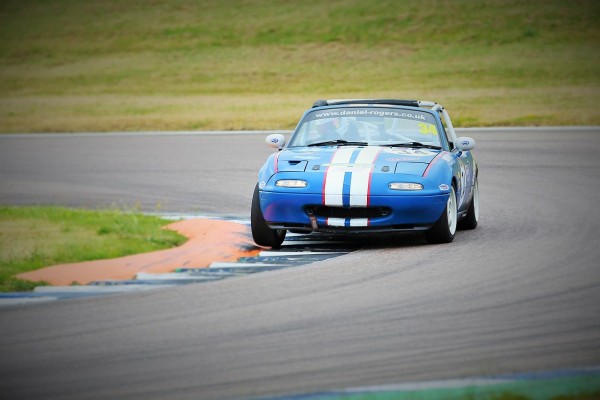 In the week leading up to the weekend we spent more time on the rolling road and unlocked more power from the Mazda by changing to a performance exhaust manifold. I must get round to detailing the work we’ve been doing in another article. It made a significant difference. Power is up by 12 bhp compared to the last round at Brands Hatch.

Also new for this weekend is the decision to share the driving with Rhys Jenkins. The plan from the start of the year was always to enter a 2 driver team due to the longer races and mandatory pit stops of the classic sports car championship, but this is the first opportunity which we’ve had to both drive on the same weekend.

So… qualifying. I started the session in order to try and bank a quick-ish lap and then allow Rhys some time to get used to the car (this was the first time he’d driven my Mazda since the upgrades). There were some wet patches across certain corners which made things tricky. It also took a lap to get used to the new power delivery and remember the track! I set a reasonably tidy lap and when the safety car came out about 10 minutes into the session I came into the pits and handed over to Rhys. We were 6th at this point as the slippery conditions worked in our favor. As the track dried we slipped back down to 11th. On the last lap Rhys got some clear space and improved on my time. It was just a shame he lifted off before the finish line otherwise we would of posted a time in the 1:47 and moved up to 8th on the grid. You can see him realise that at the end of the video;

Starting 9th on the grid was still a great result – much better than we expected given how long the straights are at Rockingham (an area where the Mazda really struggles compared to some of the other cars). During the lunch break it poured down. This is normally a good thing as we both enjoy driving in the wet, and the Mazda is quick through the corners as it is so light. By the time our race came round the track was starting to dry again, so we had similar conditions to qualifying.

This time Rhys did the first stint as we worked out it would be quicker in the pit stop change to tighten the belts for me, as opposed to slacken them for him. I think i’ve worded that quite nicely. We dropped back a bit at the start as the long run to the first corner meant that the more powerful cars drove straight past. Still, Rhys was able to work his way back through in the opening laps.

We’d misread the final instructions slightly, and this worked against us when we reached the pit stop window. The instructions said that the countdown began as we were released into the pit lane. I thought this meant the 40 minute race countdown, but it was simply the countdown to the start of the green flag laps. So we started the countdown timer that we have in the car way too early. Rhys pitted from 7th place at 18 minutes like we agreed but in reality that was only 10 minutes into the race (lap 5). This took us completely by surprise and is why in the video you’ll see me running over to the car still putting my helmet on!! All things considered we still managed a pretty quick pit stop.

My stint was relatively quiet as we had pitted so early that we overtook most cars whilst they were making their pit stops. We’d managed to get quite far up the grid, and once all the pit stops were out the way we were somehow in 5th. The white Porsche Boxster S of Jim Littman was closing us down, and despite my attempt to stay around the outside through the banking he managed to get ahead and started to pull a gap. From there to the chequered flag I had to maintain our 6th place and try not to draw too much attention to the fact that the bolts for the exhaust manifold had come lose and separated from the rear silencer pipe. Our very loud MX-5 made it across the line in 6th; our best result of the year so far, and something we never expected to achieve at the start of the year. Full results courtesy of TSL Timing here.

Next race for us in the Classic Sports Car Championship will be Donington Park on the 6th September :)