Morning qualifying was held on a drying track which was a huge help to the Mazda, as the more powerful cars on the grid are unable to put down their power advantage. We took 1st in class and were 3rd overall on the grid which was a bit of a surprise to say the least! I think that’s the best qualifying session to date, even if the times were a bit slower than normal (58.436)

By the time it came to the race the track had fully dried. During the rolling start we got completely swamped by the more powerful cars off the line. Have a look at the video – it was a bit of a close call as two cars sandwiched me completely in the middle and must have skimmed the barrier on the right hand side as I didn’t think there was even room for another car on that side. It was lucky I moved slightly left when I saw them coming.

During the race itself I knew that we’d struggle to be 3rd quickest again but I was desperate to stay as high up the grid as possible. Being towards the front of the grid meant we had an even greater exposure to the cars which are rapid in a straight line. If I’m honest I think I let this frustration get the better of me a bit too much with a Porsche 911 in particular.

I managed to make a clean pass into Clearways as I was posting quicker lap times overall and noticed that I was much stronger on the brakes. I then was immediately passed again on the straight. Into Paddock Hill bend I braked as late as possible, knowing that I was so much stronger on the brakes. When I watch the video back I did come from a long way and it’s unlikely that the Porsche would have expected me to re-appear. Still, there was space, but a bit of rubbing was needed.

We entered the next corner at Druids sided-by-side. The Porsche tried to match my braking point but despite me leaving as much room as I could on the inside we made contact. It put me sideways and sent the Porsche spinning down the hill. Have a look at the video. A good pit stop and some consistent lap times towards the end of the race meant that we finished 9th overall and 1st in class E.

I was called to the headmasters office (race control) afterwards as the marshall report came in that I’d deliberately driven into the Porsche at the hairpin. I shared my video and they agreed that wasn’t the situation. In the final classification I finished ahead and so it was put down as a racing incident. We shook hands after the race so no hard feelings – just a hammer required for the Mazda before the next race. 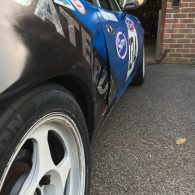 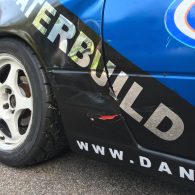 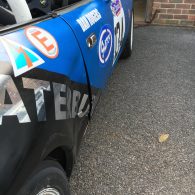 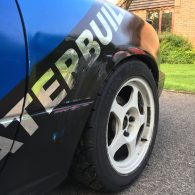