We arrived at Rockingham with a new set of tyres… Dunlop DZ03G, and optimism that this would close the gap to the class leaders. Qualifying would be the first time these tyres had seen the track however, which is less than ideal. Normally, it takes a couple of heat cycles to reach the best lap times.

We were 5th in class with a 1:44.46, about 1 second off the MINI & BMW 330 ahead. That was a pretty good result from my perspective as we were 2 seconds off at Cadwell Park previously. It felt like we’d closed the gap a bit. However, looking further up the time sheet it didn’t make for good reading. The Honda Civic on pole was 3 seconds faster. Rockingham is a fast track and the Honda engines are quick, but to out-qualify some of the E46 M3’s was a pretty blinding effort. Qualifying results sheet 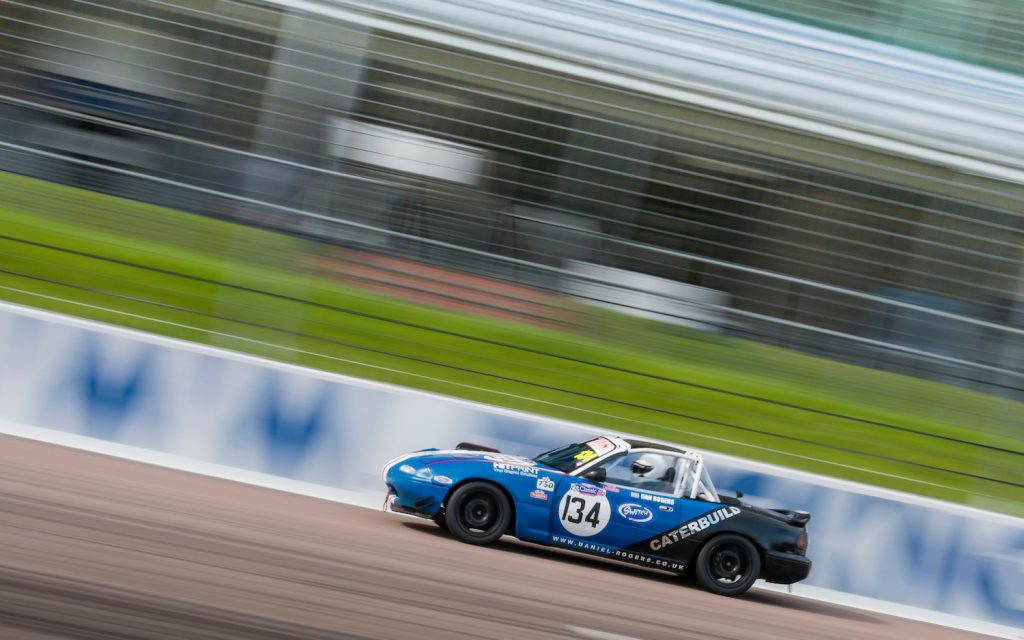 Confident that the tyres would probably produce better times after being heat cycled, I was optimistic for the race. It had been raining on & off all afternoon, but when we went to the grid it was bright sunshine and the track was completely dry. A few laps in however, that soon changed. And when I say it rained; it poured.

The amount of rain made my windscreen fog up really bad to the point where I couldn’t see a thing (I’ve now bought a ton of RainX to try and prevent this ever happening again!). The safety car was deployed as there was such a risk of aquaplaning. I pitted under the safety car and we tried our best to clear the windscreen.

The Mazda always goes well in the wet and although it was incredibly slippery on semi-slicks, I was working my way up the order into 4th overall; helped by a quick pit stop compared to others. What I hadn’t realised is that some of the others were slow in the pits because they decided to switch to wet tyres. So when some of the cars started coming back past me, I couldn’t understand how they had so much grip compared to me!

It’s been a few years since the bag of talent emptied. I simply pushed too hard trying to keep up with the cars that were on wets. I’d been running a lot of rear brake bias to avoid locking the front wheels. On the approach to the long left hander, I carried a bit too much speed on the way in, and the back of the car stepped out. The rear wheel just dropped onto the grass and pulled me straight into the gravel. I nearly made it through the other side but the car sunk too deep. DNF – for the first time in years.

Not a lot more to say… let’s focus on the next race at Brands Hatch!!!