What a way to start the 2016 season! Motorsport at the Palace… aptly named due to it’s location within the grounds of Crystal Palace Park. I’d seen details of the event after someone we raced against last year had competed in it, and managed to secure an entry for this years event.

When I was a boy…

Crystal Palace Park is actually one of the oldest Motorsport venues, and has been driven by some famous name from the time; Jim Clark, John Surtees, James Hunt. Sadly it closed it’s doors for racing in the 70’s, long before I was born. You can learn more about the history of the track on the Motorsport at the Palace website.

Credit to: Motorsport at the Palace

My childhood was spent in Beckenham, where my family lived until I was 3 years old. Crystal Palace was my local park and I used to ride my bike around the old circuit when I was younger. For that reason it has a historical significance to me and it would be a great opportunity to race here in the Mazda.

It’s a sprint: more about the event

The format is a car show, combined with a sprint event as opposed to circuit racing which I’d been used to for so many years. It feels a bit like Goodwood. That presents some new challenges as you compete against the clock. You get two practice runs in the morning, and then three timed runs in the afternoon.

To post a fast time you need to quickly learn the circuit and how hard you can push on cold tyres and brakes. There’s no opportunity to warm tyres so you have to push as hard as possible from a standstill. I was on our normal race tyres, but for sprinting competitors often use a softer compound tyre and shorter drive ratios due to the reduced top speeds.

During the course of the day my times were reducing as I worked out how hard I could push and where to gain time. My final run was the quickest, posting a time of 39.35 which was pretty impressive compared to the competition we faced. The Mazda was 36th overall out of 108 competitors. You can see the full results here. 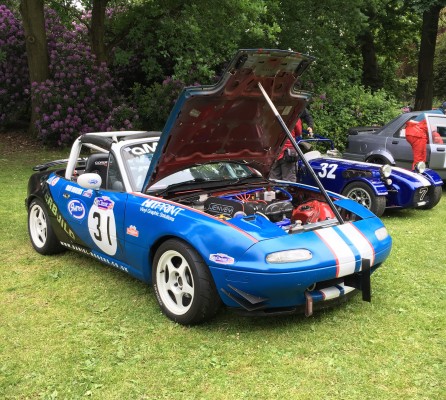 I enjoyed the day. Sprinting presents a completely different challenge to circuit racing. It was good to try something different but I feel like I would become frustrated by the lack of track time if it were to become a more regular event that I participate in. Following on from this, I’d like to try a hillclimb and see how we get on.

Thanks to everyone who came to support me at the event, and those who asked me questions about the car – there seemed to be a lot of interest in its performance which was great :)