In preperation for the race weekend at Snetterton on the 28/29th April we decided to do the track day during the week. The day was a good mix of wet and dry sessions and we made a lot of positive changes to the suspension to dial out the corner entry oversteer I had identified at Silverstone that was affecting my confdence with the car.

The only photos I have of the car is from when we turned up on Monday night and claimed the last of the unreserved garages :) if I can track down some more photos i’ll upload them. My new onboard camera got it’s first test, and despite the noise from the wind being a bit high the footage is a lot better than before. 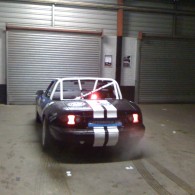 By the end of the day I felt the car was much stronger and we’ll have to wait until the weekend to see if it’s made a difference, because despite their being other MX5’s there it’s impossible to tell how the car is being run (underweight, etc). Unfortunately on the last session I had to pull over as steam was pouring from the bonnet. It smelt like coolant, and luckily it tuned out to just be a split water hose and nothing more serious/expensive! We’ll get one ordered during the week and then we’ll be heading back to Snetterton for race day.

Posted in Updates and tagged Snetterton.