Silverstone played host for the final round of the 2013 championship, and attracted the largest grid of 38 cars. The high grid capacity meant that all of those 38 cars could be out on track at the same time, which made things a lot easier than having the A & B races like other rounds.

I qualified on 7th, which was a shock as I’d been getting used to taking 5th place at the last couple of rounds at Brands Hatch and Donington Park! The lap times were extremely close – amazingly close. 4th place was 1:24.021 and I was 7th with a 1:24.081. I’ve never seen the qualifiying times be as close as that (with the exception of Roche who had teamed up with Jade to push each other down the straights). Official timing sheets are here, but i’ve summarised the top 10 below; 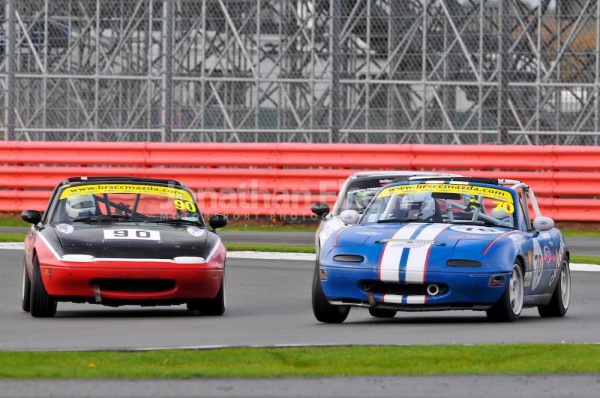 The dry qualifying conditions were sadly not maintained for Sunday’s racing and the damp track made it tricky. Fortunately I’ve always loved driving in wet / damp conditions. The years of karting are invaluable for finding where the grip is, and making you comfortable with the car moving around beneath you. Race one involved a battle with Jade Edwards and Alan Henderson which lasted the entire race. It was a bit unpredictable at times, and they both received 5 second penalties after the race for regularly exceeding track limits which moved me from 6th to 4th. Yes, I’d finally broken the run of 5th place trophies!!

For race two it really poured down, and made visibility almost impossible at times. On the first lap, you had to work out how far down the straight you were by looking at what you’d gone past, because the spray from the car ahead made the next corner invisible. In the pictures it doesn’t look too bad, but you’ll see in the video that it was really hard to see what was going on. I actually made a decent start and had good pace throughout the race. I feel away from the lead group and settled into a comfortable… 5th position. It was fate I suppose that I”d finish 5th again for the final round.