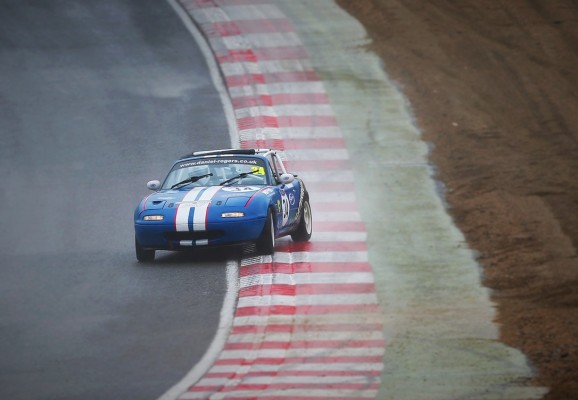 It had gone midnight when we finally finished the car in preparation for our debut in the Classic Sports Car Championship (CSCC). A whole host of upgrades have been made to the car which I will detail in another blog post. Put simply the car is now running on more aggressive cams, Jenvey throttle bodies and has a new ECU. The first time I’d experience the upgrades would be in qualifying.

Brands Hatch was very wet and this presented me with my first dilemma; whether I should be running my new Yokohama track tyres, or go for the Kumho road tyres which had less chance of aquaplaning.

Tyre choice was never a problem in the Mazda MX5 Championship as you had to run the control tyre. In CSCC tyre choice is open. I opted for the Kumho road tyres. Turns out that was a big mistake. Compared to other cars I was really struggling for grip, even when trying to stay off the normal racing line. My on-board video (using my new GoPro) shows just how slippery things were. The session was stopped half way through when the Ginetta crashed in front of me at Paddock Hill Bend. Overall I qualified 30th on a grid of 37 cars. This wasn’t what I was expecting!

For the race I didn’t really have anything to lose, and switched tyres to the Yokohama track tyres. Thankfully the difference was incredible. I’d already used the tyres in the dry and was amazed how much grip they had, but even in the wet they felt like they gripped harder than the Kumho’s could manage in the dry. Lesson learned.

Racing on a mixed grid was also new to me, as ever since I started karting 15 years ago we’ve always been in single make championships. Every car has different strengths and weaknesses. Coming from 30th on the grid really highlighted this, as on a rainy day at Brands Hatch the little MX5 was flying. We did 1.12 lap times in qualifying, but in the race with better tyres I managed 1.04. The car really excelled in the corners as it was much more nimble than the heavier M3’s and Porsche’s. On the straights it struggled a bit even with the power upgrades but it wasn’t too bad and we have more power to get out of it.

Pit stops. Again, a completely new concept to me having been used to sprint races. In CSCC, races are 40 minutes and you must pit between 10 and 25 minutes. Due to a number of safety car sessions I lost track of how far into the race I was and dived in to the pits after I caught a large group of cars ahead. As I was racing as a single driver this weekend (the remainder of the year Rhys will be joining me) I had to exit the car, shut the door and then get back in again. Putting the belts back on is a bit tricky with a crash helmet on as you can’t see down very easily. I couldn’t get one of the buckles back in and lost a few seconds. It felt like an age, but our pit stop was still one of the quicker ones.

By this point I didn’t have a clue where I was in the race. None of the cars were familiar to me and we hadn’t even thought about buying a pit board for the first round. I can see the value in one of those now! Turns out that through a combination of overtaking a lot of cars, safety car interventions and a relatively quick pit stop we were now in 8th place. Ahead was a Porsche 911 and a Toyota Starlet that was rapid in a straight line. We were pretty matched on lap times but each car was quicker in different parts of the track. I managed to make a move round the outside at Clearways when a back-marker came into play but I couldn’t hold it in a straight line. With a few laps to go I got caught by a Porsche 944, but passed a Ferrari 355 which seemed to be struggling for speed at the end of the race. After qualifying I wasn’t really expecting the race to turn out like that! Full results here 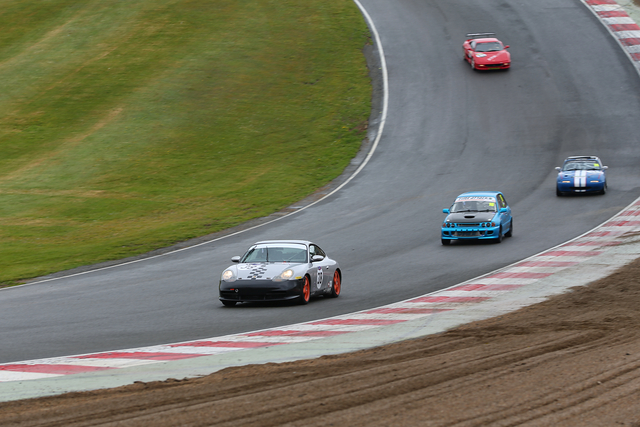 Overall, it’s one of the most fun races I’ve ever done, and I can’t wait for the next one at Rockingham. We need to get the car back on the dyno as we’re hoping that a new exhaust manifold will release some more power. Rhys will be driving the car too so it’ll be a team entry. Bring it on!