New fuel injectors fitted after the failure at Oulton Park, we headed to Brands Hatch for the race which I’d been looking forward to all year because of the night race. We were back in the Modern Classics series as the racing was on the Saturday which makes it more convenient. As this race had a night race, the race entry and preparation needed to fit all the lights had hit my bank account big time. I couldn’t share with Rhys due to his other work commitments either. I think it was close to £1,000 all in by the time you factor in fuel so I was keen to make the most of it!

The qualifying was session had similar conditions to when we first visited Brands Hatch with the CSCC earlier in the year. This time I knew which tyres we needed to be on, and roughly how hard I could push. I was driving as hard as I could in the conditions which were starting to dry as the session progressed. The Mazda excels in these conditions and despite some entertaining moments which you’ll see in the video of me sliding around on the brakes and on the power I posted the 6th fastest time overall, close behind the Porsche Boxster, BMW M3, and Posrche 911 all of which are significantly more powerful than the little Mazda.

After qualifying, the sun came out and the track started to dry pretty quickly. As we lined up on the grid I couldn’t help but feel quite proud of the Mazda as it had punched well above its weight in qualifying. It was made better (for me at least) by the cartoon-like expression it had obtained from the spotlight covers which looked like smiley faces. It certainly didn’t do much to intimidate others, but it was very in-keeping with the character of the car.

The opening laps were quite interesting as we got a bit swamped by the quicker cars in a straight line, but after a few laps things normalised and I pulled onto the back of the group ahead again. I pitted fairly early – about a lap after when the pit window opened. It seems that by doing so I completely caught out my dad who was nowhere to be found. I did all my belts myself which took forever as you have quite restricted vision when wearing a crash helmet. I’m not sure that I lost a lot of time compared to others, but I certainly didn’t gain the typical pit stop advantage which we’d got used to from the previous races which was annoying as that’s often how we get the strong results with the MX-5. I didn’t upload the video as the second stint of the race was actually quite quiet for me and we bought the car home in 8th position with a fastest lap of 55.8. 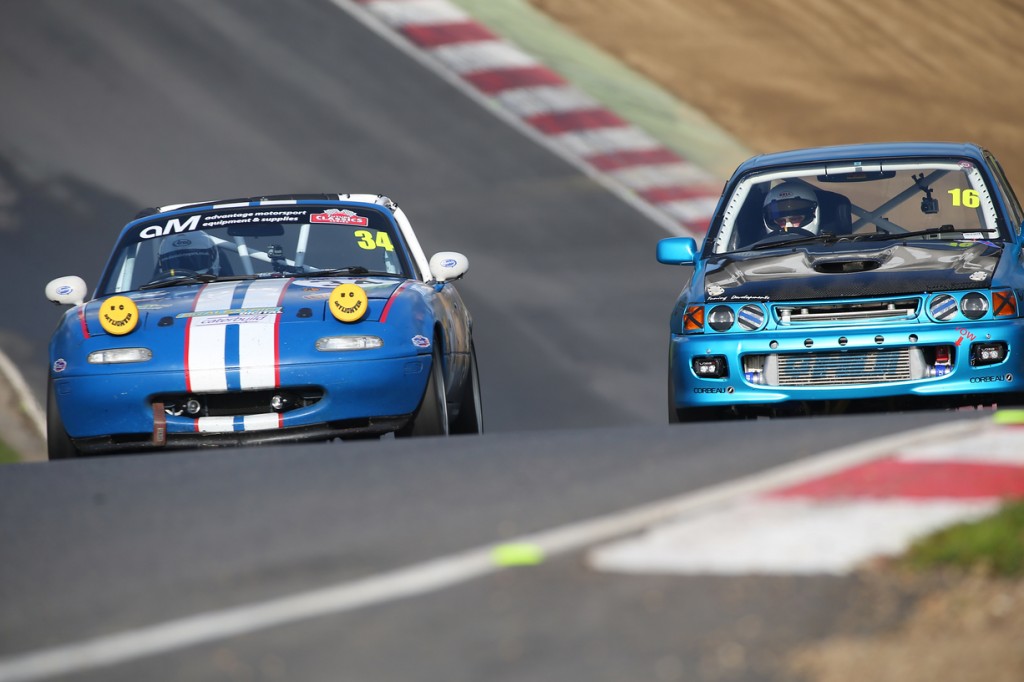 Ahead of the night race we had the opportunity to do a free practice session. It wasn’t compulsory to do the whole session but you had to do a minimum of 3 laps. This was really valuable as I was able to make some final adjustments to the position of the apex lights to get them exactly where I wanted. During the session I posted a time of 57.0 which is about a second off my day race times. We had a quick look at the data and it seemed to be under braking which I was losing time and apex speeds were identical. The cooler conditions actually seemed to help engine performance as it reached the rev limiter quite comfortably in 4th down the straight whereas normally it wouldn’t quite have that much top speed. 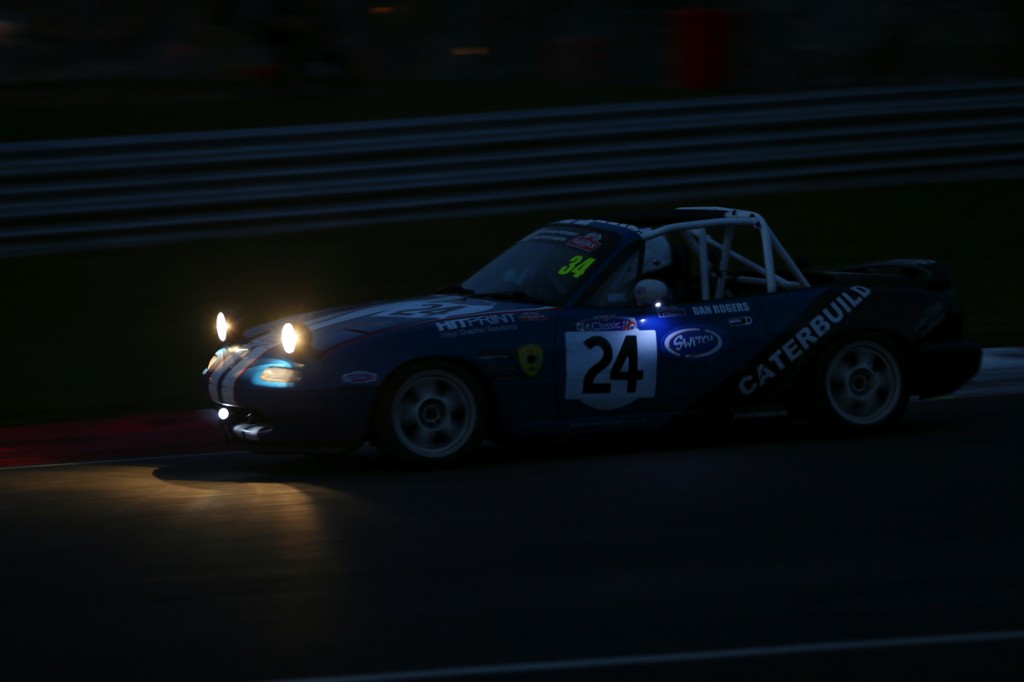 I want to say now in case I don’t word things very well over the next few paragraphs that the night race will go down as one of my favorite ever races. There are races in Karting that carried more consequence, or I’d had to fight harder for a result, but for pure fun racing in the dark was bloody amazing and I’d love to do it all again!

31 cars took the start of the night race which combined multiple series from throughout the day including the Modern Classics, New Millennium, Magnificent 7s, and Puma Cup. There was such a variety of cars on the grid that it made things even more challenging. To make it worse the method of organising the start positions had been a bit affected by the wet weather in qualifying which meant that the Modern Classics cars were towards the back of the grid. In my opinion the grid should have been based on the best time through the daytime running (qualifying and the race). We were issued with reflective race numbers in line with our starting position – the intention being that you’d know if the car ahead was a similar speed to you but in all honesty you had other things to worry about than looking at numbers.

The start of a race at night with 31 cars is a massive adrenaline rush. Most cars, like mine, had large spotlights which were absolutely blinding in the mirrors. You lose all sense of perspective and in most cases were acting on reflexes and instinct because you couldn’t be 100% certain of the position of other cars around you. I was gutted that i’d left my GoPro running after the day race by accident and had no battery left to record the night race. I have since found other in-car footage of cars that we were racing against and there camera shows just how challenging it was. In the video below the Mazda appears up the inside at Graham Hill Bend and then there’s a few laps with some close running as we struggled to clear the slightly out of position Puma Cup cars. I doubt i’ll describe things better than in the video, and so i’ll let that do the talking! Oh, and in the end I knocked another half second off my lap time by working on my braking so we were only 0.7 seconds slower in the dark than at night.

Due to a bit of a slow pit stop where Dad couldn’t see the belts properly and managed to put the shoulder strap in the hip belt slot (still not sure how he managed that) we lost some time which I had to regain in the second stint. I pushed hard and we finished in 15th – a 9 place improvement on our starting position. Safe to say, I’m looking for more opportunities to do night racing!!