So we turned up at Rockingham with the hope that the changes we had made since Silverstone would help rectify the lack of speed. These ‘improvements’ included a complete suspension overhaul with polybushes, new ball joints and relalignment. Also on the list was replacing all the earthing points as these had corroded badly, a new air filter and finally cleaned up the throttle body.

Enough of the background, and on with the racing. Qualifying was the first opportunity to learn the track and test the car. I qualified 29th and I felt as though the changes had given me more confidence in the car, which was a good starting point. Race 1 saw me involved in a few battles which made the racing much more enjoyable than at Silverstone. I finished 23rd, and improved my lap time by 0.5 seconds.

In Race 2, the lights did not work so there was a brief pause until the race got started using the flag instead. I didn’t get the best of starts, which I put down to not having it at optimal revs due to the pause. Thankfully I dodged round an accident that was hidden under a big colud of dust but in the process I had dropped down to nearly last. Still, I was able to make up quite a lot of places during the race to finish in 21st. I really enjoyed the racing and my lap time further improved by 0.8 seconds, which is a good positive sign as we are narrowing the gap between myself and those infront. 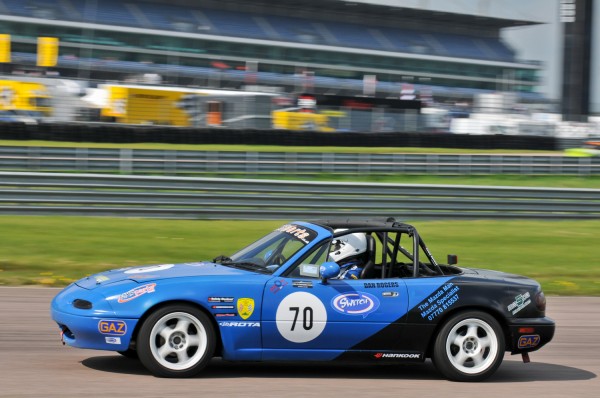 The changes we made have inspired more confidence in the car, improved the lap times and offer great potential for future races. Reliability is strong and the problems with the engine not starting appear to have been eliminated. However, we are still a long way off the lap times at the front of the grid and it’s difficult to see what to change next.

Afer the weekend I read up about engine ignition timing and decided to check ours. I was suprised to find that it was set at around 6 degrees. Stock timing should be about 10 degrees and advancing it further to 14 degrees can offer around an extra 10 bhp over the stock position. It may sound technical to some, but in the position it was set we would be extremely under powered. Suddenly things started to make sense; being slow off the line; the engine pulling only at high revs; slow exiting tight corners. We won’t know until we test it again at Donington Park in three weeks however just from driving it up and down the drive the engine feels so much more powerful and alive. I hope that this was our issue and that we can look forward to competing further up the grid where I feel we should be. I just wish we had checked it earlier! There are more changes to come before Donongton Park in May; overhaul the steering rack and tie rod ends, replace the cracked exhaust manifold. Finally, some extra stickers and racing stripes should see us on the podium in no time :)