If I was ever able to choose the weather conditions for a race then I would have ordered exactly what we had at Brands this weekend. Light rain all morning – perfect for the Mazda!

So why do we always do well when it rains? Well, on a wet track, you can only send a certain amount of power through the wheels before you just get stupid amounts of wheelspin. That lower grip level means the more powerful cars can’t put down all their power – narrowing the horsepower gap between us.

The second aspect is years of karting, where you have to search for the grip off the normal racing line. Check out my video from qualifying, you’ll see me use some weird lines trying to find grip. The racing line is slippery in the wet (more than a normal road). By flicking the car in aggressively, you immediately create understeer and can then safely push the car through the corner rather than fighting oversteer. Once it grips up, you can get it rotated and then drive in a straight line off the corner, allowing you to put down maximum power.

It was enough to bag 3rd overall on the grid, ahead of all the Porsche’s and beaten only by the Ford Sierra Cosworth and Audi V8 Quattro. Results sheet here.

Now do that in the race

A rolling start surrounding by some powerful cars was always going to be a tall order. So at the start we dropped a few positions. The karting lines that helped me in qualifying also worked against me at times, especially up at Druids hairpin where it opened the door for someone to put a car up the inside and block my quick exit – lesson learned there.

Our pit stop was very quick (quickest in the whole race) and that helped to get us straight back up the order. Had a slight scare with a backmarker when I tried to get around the outside. To be fair, I put myself in a stupid position but I’d committed to the line and they were probably unsighted. Luckily I came off the brakes enough to unlock the wheels and get it turned just before the tyre wall arrived.

On the final lap the white MG went off on the straight. You can just see it on the left in the video. This moved us from 3rd place to 2nd overall. My best result ever in the CSCC Future Classics series. Very happy!

After the day races have all concluded, there’s then a bit of downtime until it gets dark. The atmosphere is amazing once the night starts to draw in; it’s why it was one of my favorite races when we did it back in 2015 for the first time. I went with the same lighting setup from that year too, and the only addition was some battery powered LED’s on the roll cage to make it more distinctive.  I love how the car looks in ‘night mode’. 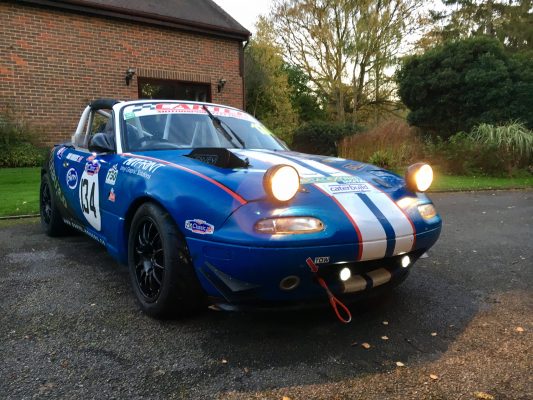 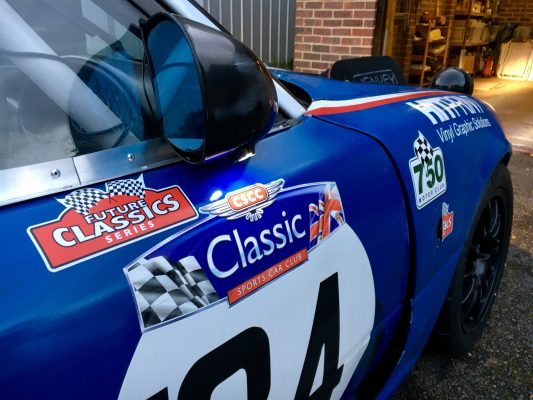 Mix the grid up

Your starting position for the night race is based upon your qualifying time from the day race. However, we wouldn’t be on a grid of solely Future Classics cars, it’s a combination of the different race series. So we were now up against the Tin Tops, Open Series and Swinging Sixties. I was surprised to find that we were 5th quickest on this grid.

The rain had stopped mid-afternoon and the track was slowly drying out to the point where slicks were now required. Hopefully, we could still be as competitive in dry conditions on this grid.

Awesome photo by Joshua Barrett during the night practice session… 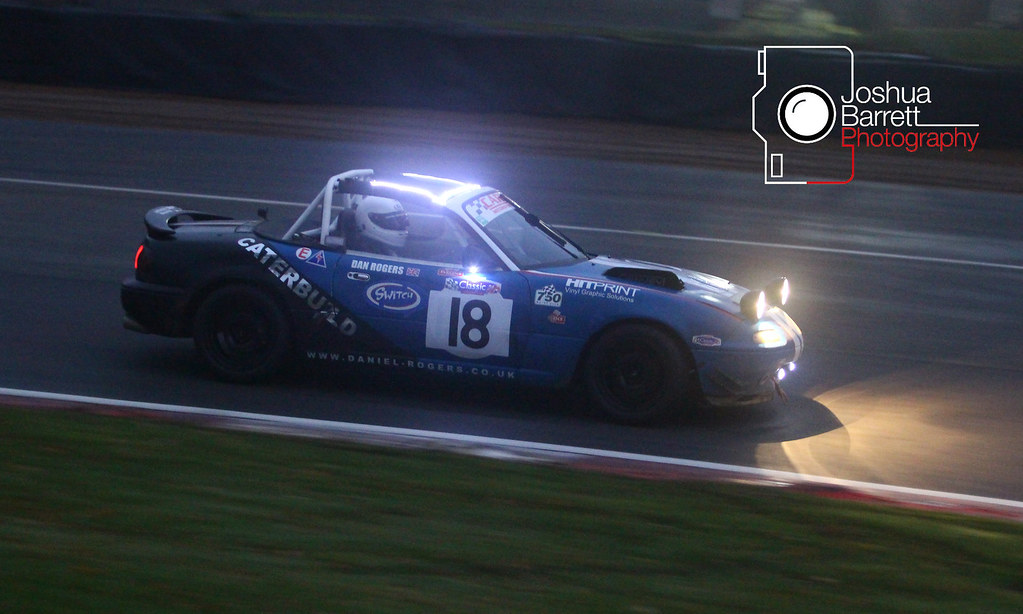 Maybe it was naive to think that the last race of the year (at night) would be without a safety car! An accident early on dropped some oil or coolant at Paddock Hill Bend making it very slippery for the first half of the lap. I went wide at Graham Hill Bend one lap because of it. The safety car came out just before the pit window opened. The next lap round I was the first into the lane.

Our pit stop was pretty quick, but then I got held on a red light at the end of the pit lane. This is used to stop people leaving the pit lane when the safety car is coming over the start line. However, I sat there for nearly 2 minutes, and watched the safety car driving around the other side of the circuit – ridiculous. We therefore went a lap down.

I pushed as hard as I could to try and regain lost time. Safety cars were regular however, and the constant start-stop nature of the racing meant that maintaining tyre temperature was really tricky, especially as the safety car was driving so slowly that we came to a complete stop at some points. If this sounds like a moan, I guess it is, which is a shame because if you take the safety cars out of the race it was great battling with the Clio’s and Fiesta’s. We were 2nd in Future Classics and 7th overall (results). We could have finished much higher up though as we were 4th quickest.

Two more trophies for the collection is a good way to round off what has been a great year. The Mazda is at the level now where it is a very strong contender in both the 750 Roadsports and Future Classics series. It’s fantastic to drive, and over winter we’d like to refine it further still. Watch this space!

Thank you to everyone who has supported me and followed my racing this year.